In Chronicles of Eden there are four major "harems" found in the story, each providing a different dynamic between its members as well as their impact and purpose in the overall story. There's the lead harem led by Daniel Sorres, the formidable guardian harem led by Daemon Warrick, the motley caregiver harem led by Max Harollson, and the Ancient evil harem led by Lazarus.

The first official, fully established harem in the series, Daniel and his mates steadily grew in number throughout Season 1, ultimately coming to hold thirteen members at the end of Act IX when the harem was officially closed. Led by Daniel Sorres, their goal is to establish peace between humans and monsters. Throughout the first Season, Daniel journeyed across the land in search of monster races who held promise of joining his crusade to unite the people of Eden together for the greater good of everyone. At the start of the second Season, this brings about the formation of a new faction in Eden with monsters who agree to stand with Daniel and his cause. This faction is rightfully called The Alliance. The members of his harem are as listed: 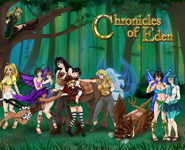 Add a photo to this gallery

Though unofficial, this harem is the second to be seen in the series. In Season 1, it came to hold eight members, with its last member joining at the start of Season 2. Led by Daemon Warrick, they are all skilled fighters, each specializing in a particular area of combat. Their goal is to prevent Eden from being destroyed by making sure that Twilight the Reaper is sealed and hidden away forever. Each girl in the harem joined for different reasons, but all hold the hope of gaining Daemon's affections. Their official title as a group in the story is, appropriately enough, the Guardians. The members of his harem are as listed:

Add a photo to this gallery

Wheras Daniel's and Daemon's harems consist of all adults, Max and his mates are all considerably younger (with a few possible exceptions). It is expected to hold eight members. Not yet official or fully formed, none of the girls are romantically involved with Max. Being so young, their affection is more soft than hardcore. It is unclear what their goal or mission will be. The members of his harem are as listed:

Known in the fandom as "The Evil Harem," these women are led by a mysterious hooded man. Their members are not fully known and their goal is vague and unstated. However, the man, the leader, expresses a desire to control The Well, a source of unimaginable power. Needless to say, this can't mean anything good for Eden, especially as the keys to the Well are locked away with the Dark Queens of Eden. This group is known in the story as the Ancients. The members of his harem are as listed:

Retrieved from "https://chronicles-of-eden.fandom.com/wiki/Harems?oldid=2744"
Community content is available under CC-BY-SA unless otherwise noted.