Specca is the fourth girl to join Daniel's harem and serves as the group's unofficial guide with their travels.

Specca wears brown sandals on her webbed feet, a light blue petal skirt, a white blouse (that doesn't become transparent when wet), and light blue tie. She wears round glasses over her brown colored eyes, has teal colored short hair, and light green reptilian fins for ears. She has aqua colored smooth scales that cover her thighs up to her torso and breasts as well as covering her forearms and hands, and a long, slender tail.

Specca is at heart a gentle bookworm with an insatiable appetite to learn about the world around her. She's not a fighter at all and often hides behind Daniel when danger is near. She's very well-spoken and polite with others and has an incredible memory of all that she's read among the countless books she's likely gone through in her life.

Specca wears no underwear as most nixies don't as they're not comfortable over their scales and causes them to itch, although her blouse appears to cause no irritation for her. Being a water based monster her scales get dry easily, something that isn't dangerous for her but rather is annoying. She's at her happiest when in water or around it to moisten her scales, that or in a library where she can read to her heart's content. In Act VII when it's learned that their new home in Twilight's study has both a library and a bathing room Specca is shown to be stunned with joy and drooling in anticipation of using them.

Her favorite food by far is fish that she prefers raw. She's able to easily catch fish by hand when in the water due to her impressive speed and sometimes eats them right away if she's hungry enough. When the group is out of fish to eat or the ones they had are taken away Specca is often reduced to tears in sorrow until plans to restock can be made, often which she'll prioritize over everything else.

Aquakinesis: Being considered 'water spirits' to humans, nixies possess certain magical abilities, one of which being able to control water itself. It's been shown in the series that Specca has to at least have physical contact in order to do so, but has then been able to create whirlpools and tidal waves in even the calmest of waters when she does.

Expert Swimmer: Specca has the ability to breathe underwater thanks to gills behind her ears and is an exceptional swimmer by far. When she's in the water her scales appear to glow and the water turns crystal clear around her. The glasses she wears are due to nixies having poor vision above land, underwater she doesn't need them and has perfect sight along with having amazing perceptual awareness of what's in the water around her.

Charming Magic: Although it's been hinted by Specca's eyes having a slight glow to them when viewed around her glasses in that she could indeed charm someone against their will, she has never once done so and refuses to as she finds it cruel to control someone like that.

Underwater Breathing Spell: Another magical talent nixies are said to have is giving someone the ability to breathe underwater. The spell to give underwater breathing has never been used or seen so far in the series, only mentioned in that it was how other nixies were able to kidnap men and bring them down to their homes without the men subsequently drowning. Whether Specca can use this ability is unknown.

Specca is first encountered in the library at Ashwood by Daniel when he and his friends are passing through. At the time she was living in Ashwood under the guise of being a human by wearing a wig to hide her hair and ears along with long gloves and dresses to conceal her scales. Her reason for being in the city wasn't to steal away men though, rather she merely wanted to be around people because they fascinated her. It's learned that she left her home and traveled Eden to see the marvels of human civilization and creation before ending up in Ashwood where she got a job at the library. Although having to hide what she was from the world she wanted to live with humans and learn more about them, and also to read more books as she loves the stories humans create.

When the city is attacked by Katie and Tora the library is heavily damaged, leading to Specca being saved by and escorted out of by Daniel, something that prompted an immediate attraction towards him as he appeared to be a knight in shining armor like the ones she had read about. After the attack was over Daniel and his friends prepared to leave while Specca wished them good luck with their quest. Before leaving Specca trips and falls into a fountain with her disguise coming off in front of the citizens. Being told to leave for being a monster and faced with being homeless and rejected by the people Specca had been living with she becomes devastated and scared. Before she could be kicked out of the city Daniel offers that she come with them and not hide who she is anymore. Seeing that Daniel truly accepts her as she is Specca agrees to accompany them as their guide, with her feelings for him turning to love almost immediately after.

Specca's personality doesn't change too much as the series goes on. She's always the group's go-to for information on monsters they come across and is the informed voice of reason that speaks up in troubled times. Although she's not a fighter she will use her magical control of the water or even straight-up rush her foe if Daniel is in dire trouble, however these instances are very few and far between during the series.

Specca's aura manifests as mental clarity when called upon by Daniel. Her insignia is of rolling waves with a bright blue light. When drawn by Daniel he's able to calmly assess the situation at hand even in the heat of battle and make the best decision of what his next move should be.

Specca's role in Daniel's harem has always been the guide. Although she doesn't know everything in the world she does know more than most and her advice is never taken for granted. In fact Daniel hasn't needed a written monster guide like the one he first made in Act I ever since meeting Specca, since she knows most monster details by memory.

When engaging in their group lovemaking sessions she tends to favor Luna as her partner when not with Daniel. This seems to be a predictable match as the two are among the gentlest of Daniel's harem members and both share a friendly, caring personality that mirrors one another.

Specca's fetish is having her ears touched or played with. The fins are extremely sensitive and cause pleasure when touched, rubbed, nibbled, or licked. This alone is usually enough to incapacitate Specca during lovemaking. 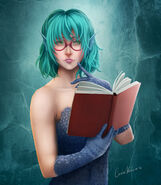 Add a photo to this gallery
Retrieved from "https://chronicles-of-eden.fandom.com/wiki/Specca?oldid=2601"
Community content is available under CC-BY-SA unless otherwise noted.